A new study from the University of California has shown that the cause of Alzheimer’s disease may be a breakdown in the tau protein, which affects the stability of the cellular architecture of neurons. With age, the body loses the ability to get rid of such proteins, which leads to the destruction of brain cells.
Alzheimer and dementia
Approximately 60-70% of dementia cases in the world are associated with Alzheimer’s disease. About 50 million people live with dementia, more than half of them in developing countries. At the same time, WHO notes that senile dementia is becoming more and more common: by 2050, more than 150 million cases of the disease are predicted. There are at least 1.5 million people living with dementia in Russia, more than the number of registered people living with HIV. 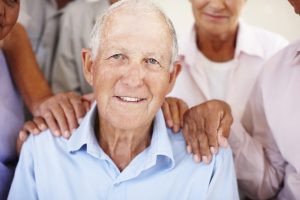 Closeup of happy senior man with friends supporting him

Dementia mainly affects the elderly. At the age of 65, every tenth gets sick, over 85 – every third, women experience the disease more often than men. Unfortunately, many are familiar with the symptoms of dementia in the elderly: forgetfulness, problems performing even familiar actions, difficulties with written and oral communication, recognizing places and even people, aggression.
two squirrels
These symptoms are mostly neurological and are associated with brain dysfunction. In the case of Alzheimer’s disease, scientists identify two distinct disorders. The first is the formation of amyloid plaques – clots of a special protein, beta-amyloid. Normally, it is most likely responsible for protecting the brain from fungi and bacteria.
The second violation is the appearance of neurofibrillary tangles. Like amyloid plaques, these are insoluble accumulations of protein that the body cannot quickly get rid of. They are formed from a modified tau protein, a protein that is responsible for the integrity of neurons.
Together, the accumulation of these two proteins leads to the destruction of brain tissue. Its volume decreases, and the convolutions are smoothed out. The cortex and hippocampus are especially affected.
So far, there is no clear answer as to which of the proteins, beta-amyloid or tau, plays a large role in the development of Alzheimer’s disease. Some studies even show that “broken” amyloid starts a chain reaction and influences the transformation of other proteins into pathogens.
Not that side

Researchers from the University of California note that 20% of people with amyloid plaques have no signs of dementia. This prompted them to think that this factor may not be decisive in the development of Alzheimer’s disease. Scientists have suggested that the culprit is not beta-amyloid at all, but just tau protein. And they began to look for the smallest differences in protein structures in patients with amyloid plaques without signs of dementia and with them.
It turned out that since proteins are complex three-dimensional molecules, their properties can also depend on how they are located in space. One of the authors of the study, chemistry professor Ryan Julian compared this phenomenon to gloves:
“If you try to put a right-handed glove on your left, you won’t succeed. It’s the same in biology: molecules can not work properly if they are turned the wrong way.”
Normally, such broken proteins should be excreted from the body. This process is called autophagy. However, with age, it slows down, our body simply does not have time to clean out the broken proteins, they accumulate and form the very plaques and tangles.
“If the underlying cause [of Alzheimer’s] is a slowdown in autophagy, then things that speed it up should have the opposite, positive effect,” Professor Julian said.
However, a recent study in mice showed that if autophagy is accelerated, the body again removes tau proteins from the body. And the symptoms of Alzheimer’s disease recede. However, this method is still far from being tested on humans.
Another solution is a direct effect on the tau protein. Here, the researchers have gone further and propose the use of a peptide vaccine. The drug stimulates the production of antibodies https://en.wikipedia.org/wiki/Antibody that attack tau proteins. The drug has been successfully tested on rats. They are already being tested on humans. So far, scientists have proven that the drug is safe for humans and have launched a third phase of trials to see if it is effective.