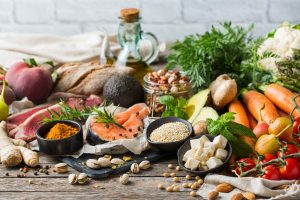 Mediterranean diet. It contains high levels of polyphenols, micronutrients that occur naturally in plants. In addition, the Mediterranean diet is low in red and processed meats, which cause inflammation in all parts of the body, including the brain.
The study involved 284 people aged 31 to 82 years. They were randomly divided into three groups based on diet. One group followed just a healthy diet, the other – the Mediterranean diet, and the third – its own version, but with more greens. In particular, participants in the third group received 3-4 cups of green tea per day and a cocktail from the semolina plant.
All study participants underwent brain MRI before and after the experiment. They also visited the gym and practiced physical activity. The smallest reduction in age-related cognitive impairment was observed in those who adhered to both forms of the Mediterranean diet https://en.wikipedia.org/wiki/Mediterranean_diet. But it was in the third group with a lot of greenery that the maximum slowdown in age-related brain atrophy was observed among participants over 50 years old, who, due to age, have an increased tendency to these pathological processes.